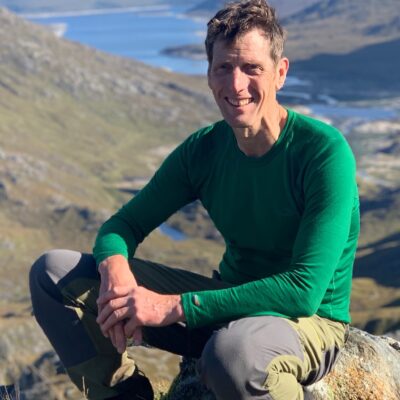 In the early 90’s Matt was working as an engineer in Texas and the North Sea, but left this lucrative work to embark on an outdoor career, initially by doing a Diploma in Outdoor Activities. A summer season in Orkney, a year on the ‘Nightwatch scheme’ of a national centre and a stint as a Senior Instructor followed.

After this, Matt took some time out from delivery to do a Masters Degree in Outdoor Education at Moray House, completing his dissertation on a wilderness programme for challenging youth in Colorado. This lead to a period of work in higher education, initially as a lecturer at St Martin’s College and then as a Senior Lecturer at UCLAN.

The gaps between periods of employment were filled with freelance work or paddling/climbing trips all over the world. An early trip to Chile sparked Matt’s interest in the power of wilderness experiences, this thread has continued with work on various youth expeditions as well as getting his degree students to plan and undertake trips independently.

In 2010 Matt moved to Scotland; he enjoys the varied coastal and mountain landscapes that the Highlands have to offer, and has switched to paddling on the sea. The last 10 winter seasons have been spent working in Glencoe, with other work and a young family keeping him (very) busy for the rest of the year.

Matt has been involved in the delivery of various nationally recognised qualifications since the late 90’s, and holds the Winter Mountaineering and Climbing Instructor, British Canoeing Level 4 (inland), Advanced Sea kayak leader and Sea kayak Coach qualifications. Although his outdoor work has been based around kayaking and mountaineering, he has also enjoyed windsurfing, dinghy and yacht sailing in the past.