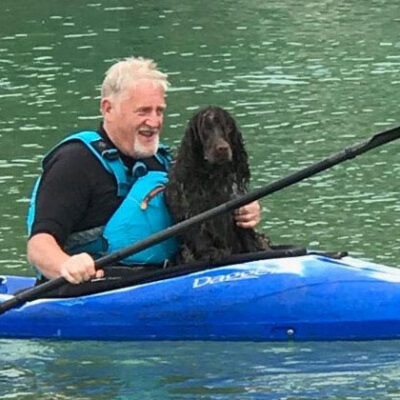 Kev is a child of the 50s and grew up in the North East in a generation of children who were allowed to play out, roam, explore, cook on open fires, climb trees and swim in the river. ‘We came home when we were hungry and tired. Walking several miles to school was normal’…..

Kev has worked in adventure activities since 1978, initially as a climber, although other duties in the first centre included illustration, field studies and aerial photography. He has since run his own centre, worked in local authority provision, freelanced, headed up a multi-discipline watersports project, been the head of centre for a charitable trust and heavily involved as a trainer and assessor.

Switching almost exclusively to paddlesports in the late eighties, as a result of wearing out his original knees (fell running and marathons), he has enjoyed most forms of paddlesports, and competed in Slalom, WW Racing, Marathon and Surf Ski.

In 1990 he joined the British Canoe Union (BCU) as the Coaching Development Officer and was responsible for overseeing the first major overhaul of tests and awards in 1994.

He holds BCU Level 5 coach awards, and has coached competitive kayaking (slalom, WW Racing, Dragonboat and Freestyle). Since the inception of Adventure Licensing in 1996, he has worked as an AALA then AALS senior inspector and expert witness.

He remains an active paddler and coach, particularly on the sea although anywhere suitably soggy will do. Favourite venues include the North Sea Coast and the South West. In winter months, anywhere abroad with warmer waters.

Kev has a Degree in Fine Art, and away from work and the water is interested in archaeology, painting (not decorating), photography and plays guitar in a 9-piece soul band.